If you work with children or adults with disabilities and haven’t yet updated to iOS 10, then you are missing out on some great new additions to the operating system and to accessibility settings.

Among the most significant additions are enhanced typing feedback, addition of a variety of color filters and screen tints, and the introduction of a new magnifier tool.  In addition, there are a number of features in iOS 10, not under Accessibility settings, that can also benefit people with disabilities.  These include improved font and user interface, the ability for Siri to access third party apps allowing for voice commands for a greater variety of apps, sharing of files in native Apple apps like Notes and Pages, and a new Home app for home automation.

In this post we are going to review a few features in detail.  For a broader look at the new accessibility features we have included links to a few reviews that we found helpful in navigating the new features. They can be found at the end of this post. 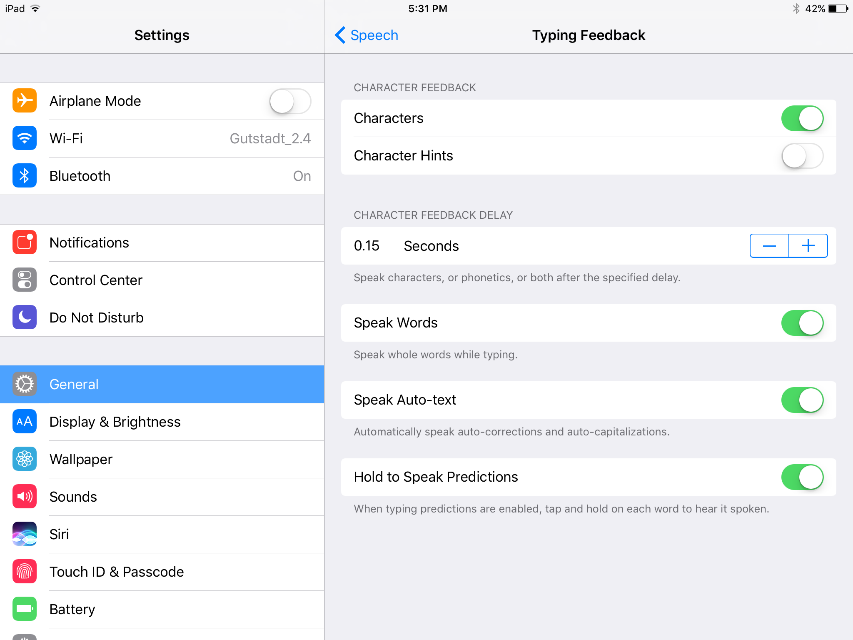 Despite being included under the Vision section of Accessibility settings, these features can be incredibly helpful for people with a range of disabilities including intellectual disabilities, motor disabilities, visual impairments and learning difficulties.  The auditory feedback can promote multi-sensory learning while typing which can be helpful for many different users.

Under Typing Feedback you can choose various audio feedback options to occur while typing including characters, words, and auto-corrections.  They can be turned on altogether or separately, depending on the type of feedback most beneficial to the user, and they work with third-party keyboards.

As an example, if we turn on “characters” and “speak words” and type the word “mom”, we will hear M-O-M as each letter is typed, and then once the space bar is pressed, we will hear “mom”.  We can also adjust the feedback delay time depending on the user’s typing speed or ability to process the information.

We are very excited about this new feature and look forward to trying it out with our students.

This feature is available only from iPad Air or newer, and iPhone 5S and newer. This is a new menu item in the Vision section of Accessibility settings which brings together some old and some new settings changing the visual aspects of the display. What’s new are the additions of various color filters for three specific types of color-blindness, and the option of color tints which has the effect of putting a colored lens over the entire display.  Colored lenses have been shown to be effective in improving visual difficulties, including visual attention and reading ability, for people with Irlen Syndrome, which often occurs in children with ADD/ADHD, learning difficulties, Autism and in the general population. (http://irlen.com/who-we-help/)

Below are some examples of what the screen looks like with various filters or tints applied. The features do not show up in screenshots, so these photos are taken with an external camera and as such the colors are not exactly true to reality but give an idea of the effects.

No filter vs Green/Red filter. Notice the reds and oranges look more like pink when the filter is on. 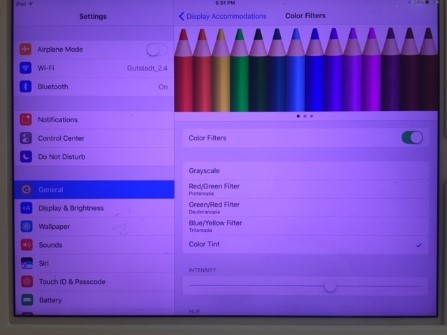 Here the whole screen has a pink tint added to it. The color and the intensity can be changed with slider buttons.

All of us need a little help sometimes, reading menus in dim light or reading the tiny text on the side of a medicine bottle.  Magnifier is an entirely new feature that uses the camera to allow you to magnify text and objects to assist in situations just like these.  For people with visual impairment it can be an essential tool to improving independence. Once turned on in settings it is accessible at any time by triple clicking the home button. From the magnifier screen you can freeze the shot to easily zoom in and out, change contrast, apply colored filters, and lock magnification. 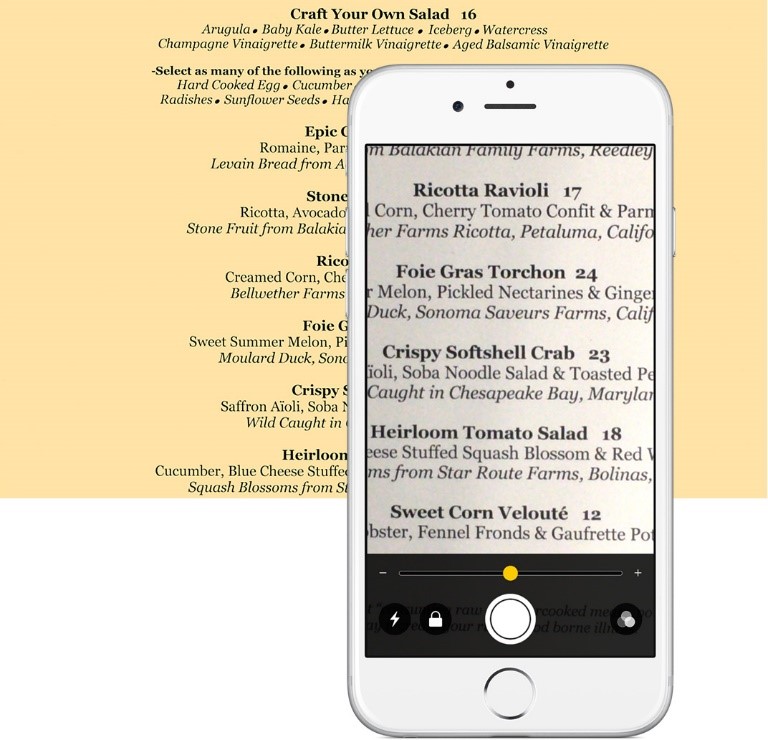 There are some new design features that embrace the concepts of universal design making the interface easier to navigate.  Some native apps such as Music got an overhaul in design and now feature a bigger bolder font with a more intuitive interface. Control Center is much bigger, making it easier to access the buttons for users with motor accuracy issues.

You can read more about the new design in this article:

Ability to share and collaborate on documents in native apps

Apps like Pages and Notes now have a share and collaborate feature, much like Google Docs, allowing users to collaborate and edit each other’s documents.  One of the reasons we like this feature is for teacher/student interaction. Our students often use Pages as an alternative notebook for things such as spelling tests, or homework.  This feature will allow the teacher to comment directly on the student’s work without having to email documents back and forth. 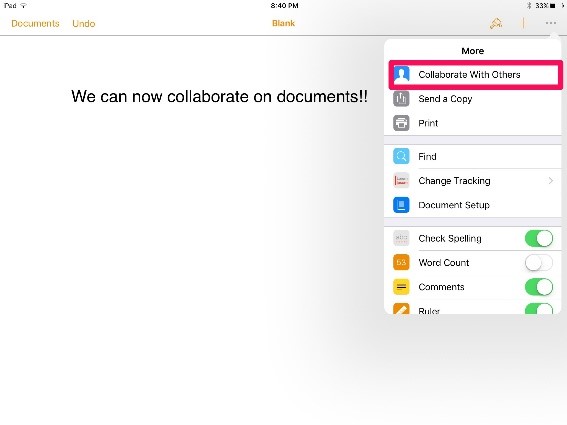 With iOS 10 Apple has opened Siri to third-party apps allowing users to access other apps using voice commands, a feature that can be very useful for people with motor difficulties.  One can now order an Uber or send a Whatsapp message without touching the screen.

For an up-to-date list of Siri-enabled apps look here. 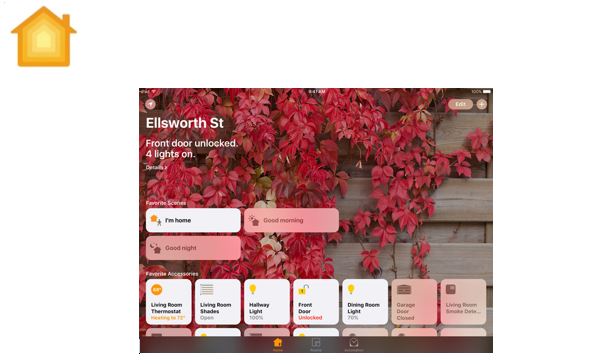 The new Home app allows users to control their home environment right from their device.  The app works with HomeKit enabled devices, which can be found in stores and online. HomeKit is the Apple framework for communicating with and controlling connected devices. With the Home app a user can set up home environment situations or “scenes” based on time of day or location.  For example, a “Leaving Home” scene could turn off the lights, lock the door, and set the alarm when you leave the house.  Smart homes are convenient for everyone but can be essential to independent living for people with disabilities and can greatly reduce their reliance on others. The app is also Siri-enabled allowing users to use voice commands to control their environment.

I couldn’t complete this post without also saying a few words about some exciting new changes to the Apple TV and Mac operating systems.

I can’t wait to start using these new iOS features with my students, I think they will prove to have a great impact on usability.  Let us know how the features are working for you…

There are many reviews on iOS 10 and accessibility to be found on the web and on YouTube.  Here a few that I found helpful when writing this post.