TOM – Tikkun Olam Makers, an initiative of the Reut Institute and ROI Community of the Shusterman Foundation, whose purpose is to connect people with disabilities with people from the worlds of industry, engineering, design, technology, and rehabilitation in order to develop solutions and products to meet specific challenges and needs. Back in November, we, some of the paraprofessional staff of Beit Issie Shapiro, took part in one of these inspirational make-a-thons which took place at the Tefen Industrial Park in Northern Israel. We sent six staff members (among them OTs, Pts, and SLPs) to participate and represented three unique and complicated challenges for the event’s makers.

The first challenge we offered to the makers was “Out of the Box” – creating a solution to be able to use eye gaze technology in the pool. Eye gaze systems allow people to communicate with their environment using their eyes. The system connects to a computer and using infrared sensors follows the user’s pupils. Gazing at a specific object in the screen for a specified time is like using a mouse to click on an object. Most often these users have AAC (augmentative and alternative communication) programs on their computers and they use their eye gaze to “type” using letters or symbols, which their AAC program then turns into speech output. In this way, individuals whose disabilities prevent them from speaking clearly and from using their hands, are able to express what is on their minds and communicate with others, using their eyes.
Since the eye gaze systems are very expensive and not waterproof, users are prevented from using the systems in the shower or in the pool. At Beit Issie Shapiro, our students receive hydrotherapy sessions twice a week and the hydrotherapists expressed a need to find a solution for eye-gaze users to be able to communicate during their therapy sessions in the water. We presented this challenge to the TOM makers and to our great joy, the team succeeded in creating a waterproof enclosure for the comuter and eye gaze system that still allowed for the eye gaze to work.
The process and results: 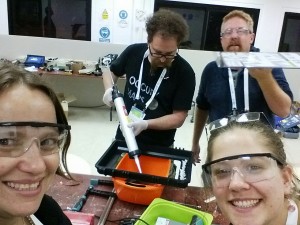 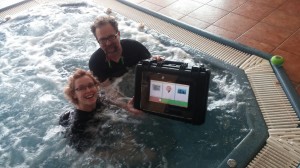 Testing the product. It works! 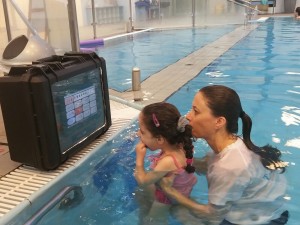 Not even one week later, the box is being used by Amit during her hydrotherapy session.

The second challenge we presented to the TOM makers was “Food to Go” – the development of a lunch box that can be easily opened by children and adults with motor difficulties, promoting independence during lunch hour at work or at school.  In our vision, the box can also be used as an accessible pencil case, pill box, or even jewellery box, increasing independence for people with limited hand function.  As simple as it sounds, it was not a simple challenge, but in the end, together with Ely, our in-house tester, the team was able to develop a working prototype that uses a pedal to open the lid. 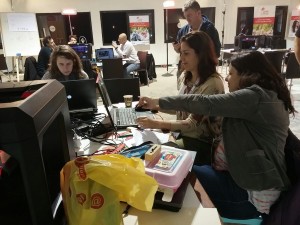 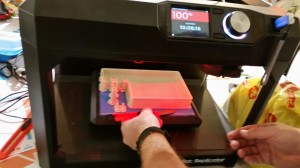 Printing the prototype in a 3D printer. Amazing technology! 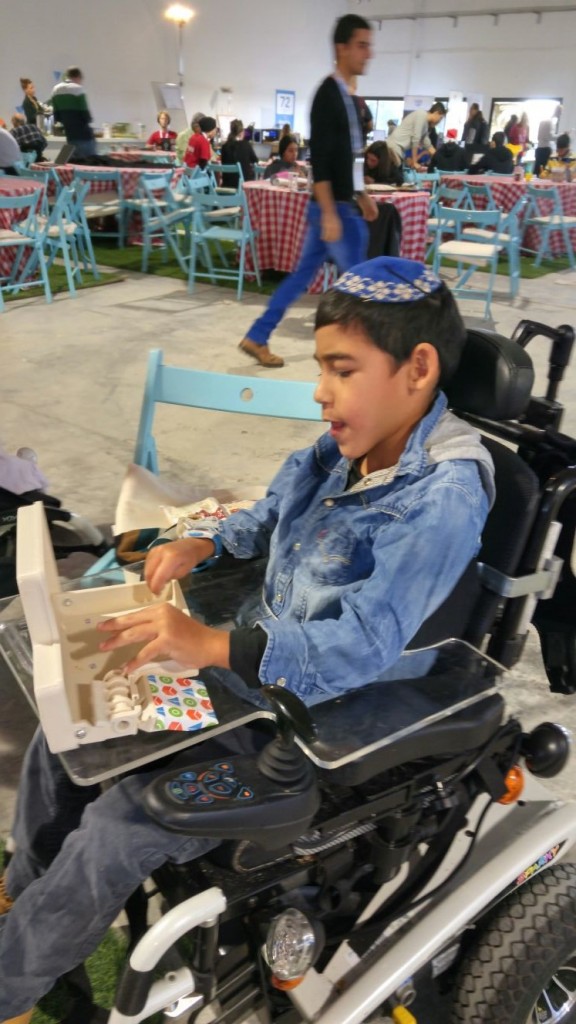 Our third challenge that we brought to the TOM makers was “Stand Alone Anywhere” – the development of a foldable standing device that would be easily carried or transported from place to place and would allow the child to be in a standing position in a variety of environments.  A standing device is a large expensive piece of equipment of which the family usually only has one and it is usually kept at home.  This means that the child cannot be in a standing position at the park, at friends’ or other family’s houses nor on vacation. Gill Rodriguez, physiotherapist at Beit Issie Shapiro describes the project best: “When a child with disabilities stands in a stander, one of the most wonderful thing that happens is the change that occurs in the way the environment interacts with him. Suddenly he’s bigger, taller…he stands at eye level to other children. These changes significantly impact how the environment relates to the child and in the way the child sees himself. Our challenge was to afford the child this basic right in all places.” 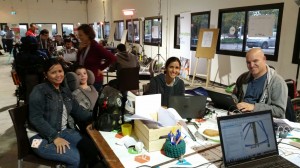 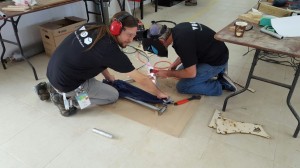 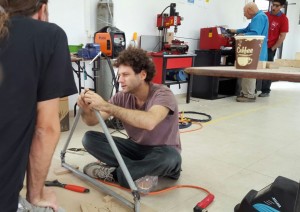 Working late into the night… 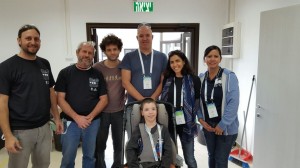 And here is some of the team of paraprofessionals representing Beit Issie Shapiro, at the end of the TOM make-a-thon, with two of the prizes won by the challenges described above. 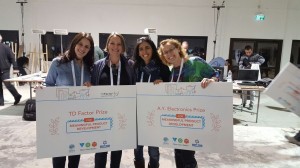 Congratulations to all the winners and kudos to all the participants! It was definitely an inspirational three days.  An experience we encourage all our colleagues and readers to try and have, at least once.  We certainly hope to relive it again.

One comment on “TOM (Tikkun Olam Makers) – Meeting the Challenge”