This time on Startup Spotlight, we are very happy to interview Ronen Moshel, entrepreneur and developer of “STEP BY STEP”, a series of educational and enjoyable apps that offers a wide variety of activities on various topics including colors, shapes, animals, numbers, language, and cognitive skills such as matching, sorting, categorization, and more, designed for children ages 1-5.

What is most unique about these apps is that they are appropriate for everyone! Meaning, the apps are designed for the general population but also include accessibility features that have been naturally integrated into the design of the apps themselves, such as switch control,  the ability to use ‘tap’ instead of ‘drag’, defining the level of difficulty, recording feedback sounds and more.

This approach is in line with the concept of Universal/Inclusive Design according to which a system/product/environment can be accessed, understood and used to the greatest extent possible by all people regardless of their age, ability or disability.

We had the honor and pleasure to consult to Ronen during the development process, and now, in celebration of the launch of the apps on the App Store, we are happy to bring you his story.

Ronen, tell us a little about yourself…

I am 41 years old, married to Etty, father to Noga (12), Tal (10.5), and Rotem (6.5). I live in Holon, Israel and have worked in software development for 22 years, 8 of which in development of mobile apps. In the last year I have been working on the development of a new project called STEP BY STEP, which offers educational apps for children ages 1-5.

How did you come to the idea to make your apps accessible to children with disabilities?

I decided to make my apps accessible to children with disabilities as a result of my relationship with the Technology Consulting Center of Beit Issie Shapiro. In the past I was involved in another project and by chance discovered that Beit Issie Shapiro was making use of those apps with their students, even though they weren’t originally designed for children with disabilities. Despite not having heard of Beit Issie Shapiro before, I connected with them and learned a great deal about the unique needs of children with disabilities, and became aware of the concept of accessibility for the first time. Unfortunately, at that time I wasn’t able to apply what I had learned, but I never forgot it, and when the opportunity arose to start a new project, I chose to apply the principles that I had learned from them. Even though making apps accessible requires a lot of effort and investment, I believe that it is our moral duty to do so; we should all help others. I am very happy to be able to do this through my work.

Which accessibility features are included in the STEP BY STEP apps?

Anywhere in the app that requires a drag or swipe gesture can be replaced with a tap gesture. For example, if you need to match two objects by dragging one to the other, you can adjust the settings so that all that the user needs to do is tap the matching object. As another example, in the coloring pages you can choose to color in spaces with either a swiping gesture of the screen or by a tap-and-fill gesture such that the shape fills in with color just by tapping it. These features are helpful to children with fine motor impairments.

For users with visual impairments we took graphic elements into consideration.  We chose large and clear images for our games and we made sure to include high contrast between the image and the background and we avoided partially transparent images as much as possible. In addition we made sure that our animations remained on the screen for sufficient time for children to process them.

Despite the fact that our major market is “typical” children, without disabilities, we chose to use graphic content that was not too juvenile.  This was because we learned that many older children, and even adults with disabilities, can make use of and benefit from our apps. In order to make the apps appropriate for various age groups, , we chose to use more realistic drawings instead of the cartoon-like genre commonly used of smiling animals with large heads and eyes. In this way, both young children and older users with disabilities can enjoy the same characters and drawings. In the same vein, we chose to avoid using juvenile fonts and objects.

In this area we used two technologies that Apple developed: 1) VoiceOver, which allows people with visual impairments and blindness to use their devices, and 2)Switch Control, which allows people with physical disabilities to use their devices via an external switch.  While working on the apps to adapt them for use with these technologies, the importance of accessibility was really strengthened for me.  I was amazed to see how Apple’s whole operating system is accessible to these technologies and this process ended up having a significant impact on me. I promised myself that I would implement these accessibility features in all my future projects. 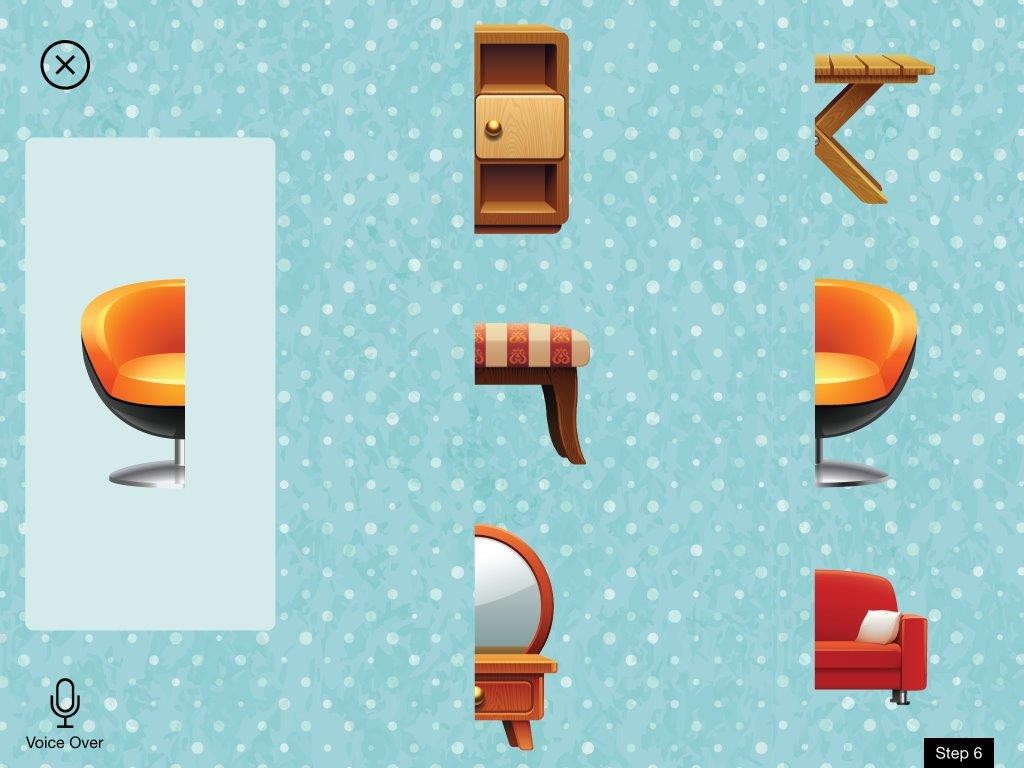 What advantages does your product have over your competitors’?

Beyond moral duty, we strive to raise the standard of quality by which we measure ourselves – to be the best in the realm of educational apps for young children. We have unique content and a wide variety of features that are not available in our competitors’ apps, such as uncompromised  user interface and user experience. Therefore the whole subject of accessibility is another stage in the process of becoming the best in the field.

Tell me a bit about the development process…

The development process took about a year, but thoughts and ideas had been gathering for about four years.  I had a table that I kept adding ideas to and when I had at least 10 ideas that were improvements upon my competitors, I gathered up the courage, and allowed myself to start this project. From the first moment, the principles that I learned at the Technology Consulting Center of Beit Issie Shapiro consistently remained at the forefront of my mind. During the development process I met with representatives of Beit Issie Shapiro at a conference that they held together with Google on accessibility. The conference hosted both developers and people with a variety of disabilities, who assisted the developers to test their apps for accessibility.  And of course, as I got as I got close to finalizing the development process, I shared the apps with the team at Beit Issie Shapiro to get their professional opinion and feedback.

And what is your plan for future development?

Currently, we are launching the first ten apps.  Two additional apps are in development and we hope to add a new app per month. We also plan to localize our apps to other languages and to add additional features to each app.