I’m very happy to be a contributor this week and to share with you a wonderful tool that both facilitates and promotes function; the Headpod.

The Headpod is a low-tech device that can be attached to a variety of seating/standing systems and even to some walkers, such as the Hart Walker. The Headpod allows children and adults with poor head control, and without excessive tone, to maintain their head in midline, to look around, to maintain eye gaze, and to be an active participant in their environment. The genius of the device is in its simplicity and in that while providing stability it continues to allow freedom of movement. The user can use his or her neck muscles to move their head. In fact, as they use their neck muscles there can even be improvement in head control without the device! (I have seen this happen!) In addition to communication, upright head positioning can facilitate better feeding and eating skills, promote improved hand function and facilitate learning.

For the vast majority of children who cannot maintain an upright head position for long periods, it is most often due to motoric difficulty and not lack of interest in the activity. As a physical therapist, I recommend trial of this device for anyone who has difficulty with holding their head up. In addition, for those children whose head tilts to one side, the device can help prevent deformation and damage to the spine that can occur as a result of the head not resting in midline.

For Ben (not his real name), a student in first grade at The School for Special Education at Beit Issie Shapiro, use of the Headpod allowed him to look around at what was going on in the classroom, for more than a few seconds at a time, for the first time. Currently, he is an active participant in lessons and social activities. The Headpod has allowed him to access head switches and use them effectively for play, learning and communication. He has even begun training on a motorized wheelchair. Because he has been using his neck muscles actively, head control without the Headpod is also improving. 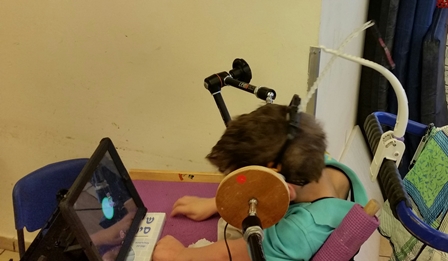 In summary, I highly recommend trying out this device with your clients.

You can share your experiences with us in the comments section.