Contrary to what you may initially think, the tablet can actually be a wonderful tool for encouraging social play.

Every game can be used to encourage social play even if it is intended for only one player. The game is simply used in a social way – children take turns or watch each other play. But there are also great apps out there intended and designed for more than one player. I will review a few here but you can find a comprehensive list on our blog in the recommended app lists under “multiplayer games”.

The most obvious type of games are app versions of classic board games, such as Four in a Row, Snakes and Ladders, Boggle, and Monopoly. Just enter a name in the App Store or Google Play and you are sure to find an app for a favorite game.

In addition, we have found many fun and user-friendly original apps, for multiplayer use. They can be great for practicing educational skills or just for plain fun in a social and even competitive way. Try them out! And if you have any other multiplayer games that work for you, let us know about them in the Comments section.

This app, from Shiny Things, is a great game for 1-4 players. The screen is divided into the number of players and for each player there appear a number of colorful shapes.
Be the first to touch the shape that is common to all players and score a point. The level of difficulty increases as the game progresses.Try not to press on an incorrect answer or you lose a point.The first to collect 10 points wins. 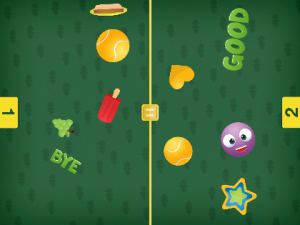 This app is another great one from Alligator Apps. It can be played by one or two players. The goal is to be first to touch the picture called out by the narrator. The game can be played with or without a timer countdown.
As in many of Alligator Apps’ apps, the written and spoken word can be recorded/written in your own voice/language. There are also options for additional customizations including, level of difficulty and altering the picture sets. 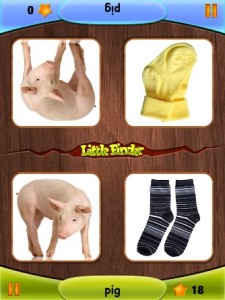 This is another app from Alligator Apps. It is a memory game meant for 1-4 players, where players take turns flipping cards to find ones that match their set. The goal is to be the first to collect all their cards. On his turn, the player touches a card to flip it. If it matches his set, he gets the picture. If it doesn’t, the card flips back over and the turn moves on to another player. 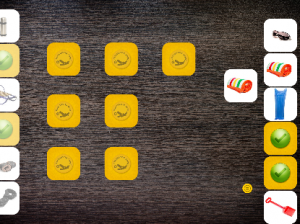 At the end, the winner gets a bonus round of guessing to which category his set of pictures belongs. 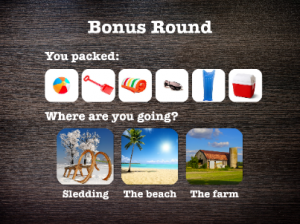 This competitive drawing game is made for two players. Players must be the first to draw and colour in the shape indicated. The winner is the player who completed the most accurate picture. The free version of the app includes shapes. In app purchases include different categories including animals, transportation, numbers, flags, and more. The added benefit is practicing visual motor and drawing skills in a fun and competitive way. 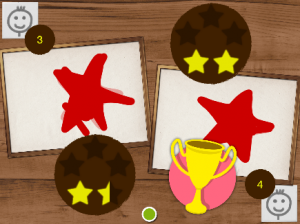 This is a fun car racing app for two players. The iPad sits in the table or floor and the players sit on either side, facing one another. Each player makes his car go by alternately tapping on the two squares in front of him. The faster he taps, the faster the car goes. The fastest and most accurate tapper wins. 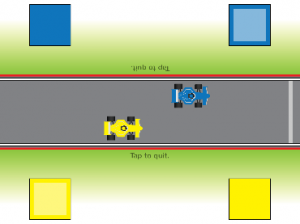 Toca Boca  has a number of apps that are perfect for play with friends. Just place the iPad between the players on the table or picnic blanket, and let the players play.

A virtual tea party! The players pick the tablecloth, give out plates, drinks, and cake. After the table is all set, players can eat and drink, choose to have the radio on or off, and blow out candles, all with the touch of a finger. The game also incorporates cognitive skills: for example, if the cake or juice runs out a hint pops up on the screen to remind the players to refill the cups or plates. If the juice spills, a hint pops up to clean it up. 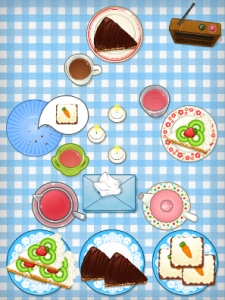 At the end of the party, all the dishes go in the sink to be washed. 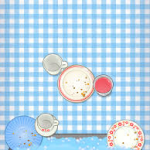 This game is similar to Toca Tea Party but in the theme of a birthday party. Also here the dishes are put in the sink to be washed.

A wonderful game allowing players to play “store”. There is a nice variety of items to “stock” the store with and players practice money skills as well.
The game has a few stages: In the first stage the “seller” chooses the stock for the store from a catalog. The store is then open for business and the “buyer” chooses what they want to buy. The seller punches a price on the cash register and the buyer must open the wallet and take out the correct number of coins and drag each one to the register drawer. The buyer continues with each item in the basket. There are only 10 coins in the wallet, but if the buyer needs more, the wallet spins some “magic” and the required number of coins appear. 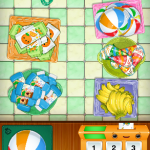 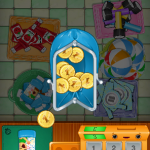 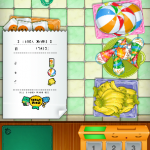 This game is different than the other Toca Boca apps in that it is more structured, with clear stages. The element of money is well integrated into the game and allows natural practice. It provides an element of reinforcement and a fun way to practice math skills.

Find a friend and start playing!